Ask Alannah – fertility and getting pregnant

Our guest blogger, Alannah, is currently in the second trimester of her pregnancy. We caught up with her to find out about how having a stoma impacted her fertility and what challenges she’s faced in early pregnancy. 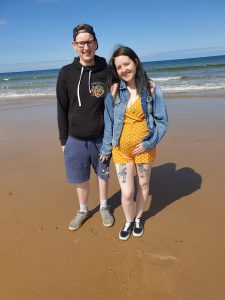 “I was told I would never have children”

At age 20, my Crohn’s disease and Ulcerative Colitis was so severe, I had gotten sepsis and needed emergency surgery for an ostomy bag. A few months later I became septic again in my rectal stump – this is where they leave your anus in place – and needed surgery to have it removed and sewn up (this procedure is also known as a Barbie Butt). After this operation I had awful periods, where at one point in 2017, I didn’t have a normal period for 9 months! During a hospital admission during that year, I was told that I would never have children due to the barbie butt surgery and I was devastated.

“The universe had a very different plan for me”

After a few years went by, I had to go to hospital one day with terrible periods and pain where my practice nurse confirmed I had miscarried in the early stages. After that, I stopped trying and gave up hope that it would ever happen for me. However, the universe had a very different plan for me! Just at the end of February, I missed my period by two weeks and thought, “Gosh, this is strange!”, so randomly one night I took a test and it said I was pregnant! I took another 3 tests JUST to be sure! I went for my first scan at seven weeks, and they confirmed a very strong picture of the baby followed by a scan at 13 weeks which, again, showed everything is going great.

“It has not all been plain sailing”

I have been really sick which is to be expected in your first trimester. Now at 18 weeks, I am in my second trimester, and I have still been experiencing sickness and also pelvic pain and diagnosed with Pelvic Girdle Pain. My stoma has actually been very well behaved. However, what I didn’t know is that your bowel can swell and cause the stoma to become bigger some days, where I need to cut my bags a little bigger. I’ve also had terrible constipation and a few blockages, so I’ve made sure I have very safe and less aggressive laxatives here at home in case it happens again.

“Your first pregnancy with a stoma can be worrying”

Many foods you could eat before you may find you can’t now. However, knowing these dos and don’ts is a good thing so you can avoid them during your pregnancy.  As each week goes by, you will notice your stomach becoming more bloated looking and may even start to show a bump! Making sure I stay hydrated with electrolytes has been the most important thing I have learned so far and to always call my midwife if there are any issues. The sickness can ease some days and other days it will be bad so make sure to rest up as much as you can if you are having bad days. If your sickness does not ease you must call your doctor and discuss options to help this. I also really recommend the advice I have gotten from my physiotherapists which is to do your pelvic floor exercises!

About the author: Alannah is an ostomate, chronic illness, mental health, invisible illness and disabilities blogger. She lives in Scotland with her fiancé and dogs. We will always do everything we can to help ostomates share their stories. If you’d like to become one of our guest bloggers, please get in touch.